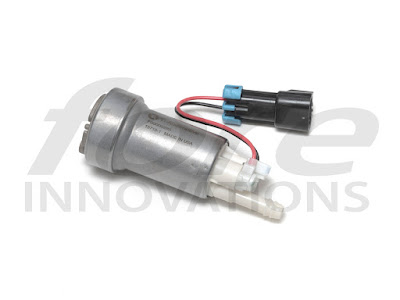 Let's get the name straight...it's called the TI Automotive F90000285.  (pronounced: eff ninety thousand two eighty five)  A proper abbreviation is "TI 285 pump"  The manufacturer rates it at 470 liters/hour at 13.5 volts and 40 psi.  Our own in-house testing confirmed the published flow data of the pump to be accurate within 2%.

The "13.5V and 40psi" parameters are pretty much the unspoken standard by which fuel pumps are rated.  In today's world, nearly all potential buyers of this fuel pump will be running it in a forced induction application with a boost referenced mechanical fuel pressure regulator.  With that being said, pump flow at "base + boost" pressure should be evaluated.  When brushed, electric fuel pumps are being used, we recommend a 43 psi base fuel pressure, although some will run 58 psi base pressure, which makes the injectors "act" bigger, but at the expense of making the pump work harder and flow less.  Below is the performance chart that we reproduced in liters/hour flow based on the manufacturer's data. (which was provided in gallons/hour) 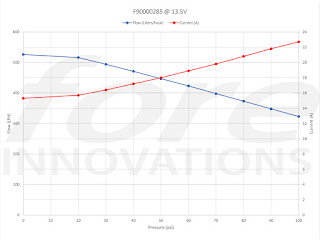 The F90000285 joins the F90000274 and F90000267 as TI Automotive's top shelf flex fuel pump offering.  They are all a little bit different, but all very similar...so we need to present a little information so our customers can properly choose the right one for the job.  For the scope of this blog post, we'll omit the [standard pressure] 267 and just compare against the 274.  Besides, everyone is asking about how the new TI 285 compares to the TI 274, so here is your answer: 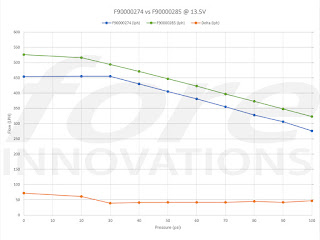 In our dual pump systems (that allow the pumps to work to their full potential), we're pretty comfortable saying a pair of TI 274s is good for 1000+ rwhp (E85 in most passenger car applications)  With the new TI 285s, we'll simply raise the bar to 1100+ rwhp.


Posted by Fore Innovations at 11:35 PM No comments: 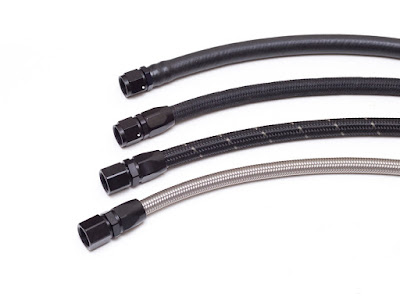 Line Types:  Startlite will emit fuel smell and should only be used on cars kept outside or in detached garages/shops.  Cars kept in attached garages should use FlexLP or PTFE, which will not emit a fuel smell.  PTFE has a stainless outer reinforcement and will last forever, whereas FlexLP has a soft black/gray nylon outer braid and some insulating properties.  (no NVH and more friendly with fuel pressure sensors/gauges)

If you want to know more detail, please read on:


We suggest -8 feed and return in any dual pump setup, simply because there is no measurable benefit to running a -10 feed with any dual pump fuel system.  However, selecting a -10 feed is a good choice if you're planning to possibly upgrade to a triple pump system later (via our triple pump upgrade program).  Of course, it is possible to run a -8 feed and -6 return; however, most of our customers find the fuel system installation is more flexible when all the fittings are the same size.

-10 feed and -8 return lines allow any triple pump system to operate without restriction.  However, -8 feed/return may be used if you're running three small fuel pumps (i.e. GSS342) or if your fuel system choice was marginal over whether to choose a dual or triple setup.  So, if you're making 1100 rwhp on E85 (which is possible on a dual pump setup if your build is very efficient) but you chose to go with a triple pump setup, we would suggest a -8 feed/return since you don't need every ounce of performance out of a triple pump setup. 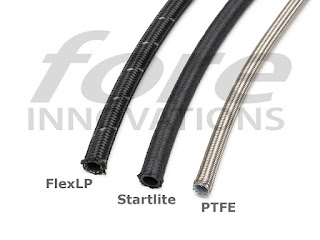 We do not recommend any push-on style hose for fuel. (even the stuff we carry) The barb on push-on hose ends stretches the fuel hose in the direction of failure.  Even securing the hose with a hose clamp will not prevent failure, since it does not change the simple fact that the hose is stretched out at the tip of the barb. (failure point) However, push on style hose and fittings are a good low cost alternative for use with lubrication and coolant lines.


FlexLP has the best ratio of pros vs cons than our other hose offerings.  Most importantly, it's low permeability prevents fuel vapor smell when the vehicle is parked in closed areas.  Cosmetically, some of our customers prefer the black outer braid over the stainless braid of PTFE.

PTFE is the most resilient to heat and chemicals than any other fuel line we offer, and likewise can be expected to outlast the vehicle.  The PTFE core cannot be permeated by any fuel, and therefore will not emit a fuel smell when the vehicle is parked in closed areas.  Cosmetically, some of our customers prefer the look (or contrast) of the stainless outer braid.


Startlite is race hose, and therefore we only recommend it for vehicles that are stored outside or kept in a detached garage or shop.  Fuel can permeate the lines and will usually emit a fuel smell in the storage area.


Posted by Fore Innovations at 11:28 PM No comments: